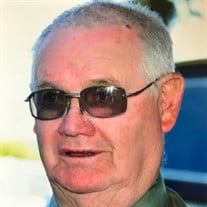 Chad was born and raised in Kamas, Utah, enjoying the life that only a small-town atmosphere can bring. He was born August 19, 1943 and was the ninth of eleven children born to Claude Merlin and Hilda Grace Fullmer Thacker. Chad graduated from South Summit High School in 1963 and then fulfilled a 2-year British mission which he loved. He served in the Army in Vietnam, and received a wound through his arm near the end of his service. He spent some time in California doing construction and then returned home to Kamas and helped in the building of the cabins in the Jeremiah Johnson Movie. He was so good with the wild animals owned by Dick Robinson that he was hired to come work for him. It was at this time he met his sweetheart on a blind date, Barbara Haueter. They were married May 28, 1971 and spent the summer traveling and working for Dick. They returned to Midway where Chad built their home and there, they raised four children; Shane, James, Joe, and Tonya (Adam) Jenkins. Chad worked construction for many years, ending up owning his own Thacker Construction Company. He loved Cowboy Poetry and had many poems put to memory, which he loved to share. He was faithful in his church callings and was always willing to help those in need. He enjoyed working in his shop building anything from caskets to picture frames. He had a great love of family and enjoyed time spent together. Chad had a stroke and three weeks later on August 7, 2021, he returned to the loving arms of his Heavenly Father. He is survived by his wife Barbara, his four children, twelve grandchildren, and six great-grandsons. Funeral services will be held on Thursday, August 12, 2021 at the Memorial Hill Church Building, 250 E. 200 S., Midway, Utah at 11:00 am. A viewing will be held from 9:30 am to 10:30 am prior to the service. Burial will follow services at the Midway Cemetery. Special thanks to Encompass Hospice, and especially Polly, Amber, and Kristy who made those last days bearable. Stream Live at: http://zoom.us/j/4356545458

Chad was born and raised in Kamas, Utah, enjoying the life that only a small-town atmosphere can bring. He was born August 19, 1943 and was the ninth of eleven children born to Claude Merlin and Hilda Grace Fullmer Thacker. Chad graduated... View Obituary & Service Information

The family of Chad Lamar Thacker created this Life Tributes page to make it easy to share your memories.

Chad was born and raised in Kamas, Utah, enjoying the life that...

Send flowers to the Thacker family.