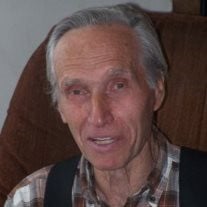 Our dear dad Bruno Gustav Arno Haufe, 83, passed away Thursday, March 27 at his home in Hoytsville, Utah. Bruno was born October 14, 1930 in Kolow, Greifenhagen, Pommern (Prussia) to Bruno Adolf Arno Haufe and Johanna Charlotte Elise Matthies Haufe. He married Hannelore Elsa Hill on March 11, 1957 in Salt Lake City, Utah and their marriage was later solemnized in the Salt Lake Temple of the Church of Jesus Christ of Latter-day Saints. As a young boy you could often find Bruno ridding the farm of pests with his air rifle or swimming in the lake near his home. He became an apprentice in a machine shop at the age of 14. Bruno immigrated to the United States in 1954 and later became a U.S. Citizen. While in the United States he developed great friendships at the places he worked. Bruno was very talented at machine work and often used his skills to keep his neighbors equipment running. He enjoyed serving his fellow men and was known for his integrity and service to others. When relaxing at night he often had a sketch pad and pencil in hand designing his next project. He loved to build and fly sail planes and model airplanes. Later in life you could always see Bruno riding up and down West Hoytsville Road hauling rocks down to the river in his little truck or in the shop tinkering on some project he was working on. He enjoyed working with honey bees and shared many of the traits of his hard working apiarian friends. He was always active until the last few years of his life. Preceding him in death were his parents; his brother Helmut Haufe at the age of 4; and his beloved wife on Apr. 23, 1979 and baby grandson. He is survived by his three daughters, Judith Johanna Haufe of Henefer, Heidi Hannelore (Mark Brig) Butters of Wallsburg, and Debbie Dora Haufe of Midway; his son Arno Bruno (Jennifer Lynn) Haufe of Hoytsville; 13 grandchildren and two great-grandchildren, with one on the way. He is well loved and will be greatly missed. We find consolation knowing that he is with his beloved wife and family. There will be a viewing Tuesday, Apr 1, 2014 from 6-8 p.m. at the Hoytsville Church House, 1095 S. Hoytsville Rd. Funeral Services will be held Wednesday, Apr 2, 2014 at 11 a.m. with a viewing preceding the funeral from 10:00 to 10:45 a.m. Interment will be in the Hoytsville Cemetery. The family would like to give their thanks to all who visited with Bruno and to Encompass Home Health for their love and tender care during his last days. Condolences may be sent to the family at www.probstfamilyfunerals.com. We would love to hear of your memories of Bruno.

The family of Bruno Gustav Arno Haufe created this Life Tributes page to make it easy to share your memories.

Send flowers to the Haufe family.