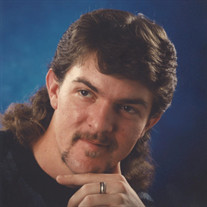 Brent Doyle Norton, born March 6, 1968 of Heber City, Ut., died March 22, 2019, unexpectedly, but peacefully, at home in Midway, Utah. He is survived by his loving partner and best friend of over 20 years, Andy Medina. He is also survived by his parents, Ray and LaRue Norton, two sisters Audra (Cory) Ashton and Diana (Mike) Naylor, nephews and nieces; Derika Jade Lemley, Shonie Norton, Bailee and Paden Ashton. Brent grew up and attended school in Heber and on Maui, HI. He went to a year of college on Maui, after getting his GED at just 16, and as one of the top students ever to do so. He later came back to Utah getting his degree in Cosmetology at Bon Losee Academy in Provo. He worked at several salons, but lastly at Great Clips in Heber. He was very creative and artistic in everything he did. He loved the outdoors, camping in the mountains or on the beach. He loved Jeopardy and deep, philosophical conversations. His sense of humor was off-the-wall and could make us laugh in the hardest of times. He loved his family and friends deeply, often taking on their troubles as his own. He was very spiritual and intuitive, believing in the metaphysical world, using it to give comfort to those he could. He also suffered from chronic migraines that in the later years became debilitating and kept him from living life to its fullest. Family, friends and others whose lives Brent touched are invited to join us in a Celebration of Life service at Probst Mortuary in Midway, Ut., on April 6th at 1 pm. In lieu of flowers, you may bring a memory to share; let go of a grudge, smile at someone who needs it, or just remind those you love, how much they mean to you!

Brent Doyle Norton, born March 6, 1968 of Heber City, Ut., died March 22, 2019, unexpectedly, but peacefully, at home in Midway, Utah. He is survived by his loving partner and best friend of over 20 years, Andy Medina. He is also survived... View Obituary & Service Information

The family of Brent Doyle Norton created this Life Tributes page to make it easy to share your memories.

Send flowers to the Norton family.