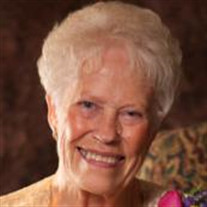 Age 81 years, a longtime resident of Murray City passed on 31 December 2016 in American Fork, Utah from the complications of age after a severe stroke left her a hemiplegic in 2011. Generous, Sweet, Happy, Patient and Optimistic are all words that describe the life of Bonnie, an active member of the LDS faith. She loved Ray Winn, writing poetry, collecting rocks, crocheting gifts for others, anything sparkly and planning parties. Bonnie was born 13 September 1931 in Cedar City Utah to John Wilford Anderson, who died when she was a baby and LaVon Shurtz. She had 3 brothers and 3 sisters, the fifth child of seven children born to LaVon. Bonnie married Robert Errol Purcell in Boise Idaho in 1952, They had four children, Twin boys who died at birth, a daughter, Linda Jo married to (Gregory) Christensen, of Wallsburg, Utah, a son, Richard Errol married to Camille Billings Winn, also of Wallsburg, Utah. Bonnie was widowed in 1964 and then moved to Salt Lake City, Utah. There she met the love of her life, Lorus Ray Winn. They married 22 November 1967. Ray and Bonnie continued together in their love of family, the out of doors, scouting, camping and exploring through jeep trips and trips with the Good Sams Club. They spent many days camping on the mountains above Mount Pleasant, where they had property in Aspen Hills, which they named “Blue Sky.” Eventually they both served on the board for Aspen Hills Owners Association where Bonnie volunteered her skills as secretary treasurer for 18 years. During her career days she worked thirty years for Mountain Bell Telephone Company. Ray and Bonnie adopted a child Todd Ray Winn, Murray, Utah, and had one daughter together, Tori Rae married to Travis Foley of Driggs, Idaho. Bonnie was survived by her husband of 49 years, Lorus Ray Winn, four children listed above, nine grandchildren, and twenty-one great grandchildren. Siblings; Shirley Wilson of Murray Utah, Betty & (Richard) Lundstrom of Ivans, Utah, Jim (Dixie) Anderson of Paragonha, Utah, Lorna (Ken) DeFeibre of Concord, California and Peter & (Jackie) Doolin of Springville, Utah. Preceded in death by her parents, one brother, Dar & (Jenny) Hill, Brother in laws, Bill Wilson, Max Christensen, David Cosby, and one granddaughter, Jessica Lyn Curley. Funeral Services will be held at 11:00 am on Wednesday, January 4, 2017 at the Wallsburg LDS Church Building (494 W. Main Canyon Road, Wallsburg, Utah). There will be a viewing held from 9:00 – 10:30 am prior to the services at the same location. Interment will be in the Wallsburg City Cemetery.

Age 81 years, a longtime resident of Murray City passed on 31 December 2016 in American Fork, Utah from the complications of age after a severe stroke left her a hemiplegic in 2011. Generous, Sweet, Happy, Patient and Optimistic are all words... View Obituary & Service Information

The family of Bonnie Anderson Doolin Winn created this Life Tributes page to make it easy to share your memories.

Age 81 years, a longtime resident of Murray City passed on 31...

Send flowers to the Winn family.