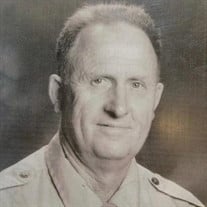 Blaine Smith passed away quietly at his Provo home on February 5, 2022. He was born in August of 1936 to Earl and May Smith. The most important date in his life was February 2, 1955, when he married his high school sweetheart LaNeva. Together Blaine and LaNeva had 7 children, dozens of grandchildren, great grandchildren and a recently born great-great grandchild. Heber Valley and its people were loved by Blaine; deep friendships were built and continued throughout his life. He consistently and constantly served others and watched out for people in need. His concern was genuine and he served by removing snow, gathering wood, sending meals, repairing items, organizing service projects, and providing his own labor and resources. Blaine had a tender spot for the widowed and made extraordinary efforts to comfort and serve them. As a student, Blaine was known for his antics and pranks—many for which he should have been arrested! He attended Central Elementary School on Main Street. Always popular with his peers, he enjoyed attending Wasatch High School where he was known for his athletic talents in football and basketball. His adult life began abruptly after high school when at the age of 18 he joined the US Army serving in the US occupation of post-war Germany. After his honorable discharge from the military, he maintained his powerful allegiance to the United States of America. He was politically active serving on the Daniel Township Council. Voting was important to him and he encouraged everyone to cast their ballot. He was an active member of the American Legion and enjoyed serving in that capacity. Work was a passion for Blaine and together with LaNeva they provided all necessities of life for their family. His work ethic was extraordinary and he instilled this quality in his children which has served them well. Blaine was never reluctant to labor and he approached all tasks with a can-do attitude and had the skills to accomplish the job. Professionally he was a soldier, logger, butcher, bus driver, state road worker, carpenter, welder, mechanic, farmer, and laborer. Blaine was never too good for any chore and he would muck corrals and even septic systems when there was a need. He successfully operated his businesses Smith’s Meats in Heber City and Dependable Welding in Evanston, WY. The small farms he ran were another obsession and he used these resources to provide for his family. He raised beef, pork, lamb, poultry, vegetables, fruits, and nurtured his dear milk cows. At many family meals his children would boast that everything on the table had been produced on the farm. The abundance of food was often shared with others. Blaine was a lifelong active member of the Church of Jesus Christ of Latter-day Saints and served in bishoprics, primary, quorum leaderships, and his greatest devotion of scouting. Mentoring dozens of young men, including his four sons, to the rank of Eagle Scout gave him great satisfaction. The prestigious Silver Beaver was awarded to Blaine for his dedication to scouting. In retirement, Blaine and LaNeva served a service mission to Washington State and Alberta, Canada where they had responsibility for building maintenance on Church farms. All his skills were implemented to fulfill this calling and he proudly and eagerly served. After LaNeva’s passing, Blaine continued to use his talents in church service. The Heber Valley Young Women’s Camp was the beneficiary of his construction and maintenance skills. He built from scratch the people-mover trailer that is still in use today. The pinnacle of his Church service was rendered as an Ordinance Worker in the Provo Temple where he served until the Covid outbreak. Quilting. Wow! In retirement Blaine and LaNeva made dozens of tied quilts. After LaNeva’s passing, Blaine continued to tie quilts and he independently learned how to sew the bindings and complete the finish work. All of his offspring and dozens of others were the beneficiaries of this talent he developed late in life. Blaine loved seeing the happiness and joy of others. This was demonstrated by hosting his annual Easter Egg Hunts, making his Halloween puffed-rice balls, anonymously assisting Santa Clause, and having a pocket full of root beer barrels. Quickly flashing a smile was a lifelong characteristic. His smiles were genuine and those who knew him well could read his variety of smiles and what they meant. Blaine spoke his mind and would dig into his beliefs and defend his position. He knew what he felt and he was never bashful about expressing his opinions. On October 5, 2021, Blaine contracted Covid although he was fully vaccinated. After 7 weeks of hospitalization and rehabilitation, Blaine returned to his Provo Jamestown apartment. Blaine never fully recovered from this debilitating disease. Blaine was preceded in death by his precious wife LaNeva, his parents, all of his siblings and son-in-law William Pacheco. His living family includes Sue and Matt Grizzle, Phoenix, AZ; Shirley and Wayne Carlston, Hurricane, UT; Sharon and Joe Webb, Lyman, WY; Steve and Barbara Smith, Evanston, WY; Sheldon Smith and Jason Fish, Farmington, NM; Stan and Emily Smith, Provo, UT; Shane and Jennifer Smith, Payson, UT; and many grandchildren. A viewing will be held on Friday, February 11, from 7:00-8:30 PM at the Heber Family Funeral Home, 288 North Main, Heber, UT. On Saturday, February 12, a second viewing will be held from 9:00-10:30 AM followed by his funeral service at 11:00 AM at the Daniel Ward Chapel; 2285 South Daniel Road, Daniel, UT. Anyone who wants to watch the service via live stream can do so at this link https://my.gather.app/remember/blaine-h-smith

Blaine Smith passed away quietly at his Provo home on February 5, 2022. He was born in August of 1936 to Earl and May Smith. The most important date in his life was February 2, 1955, when he married his high school sweetheart LaNeva. Together... View Obituary & Service Information

The family of Blaine H Smith created this Life Tributes page to make it easy to share your memories.

Blaine Smith passed away quietly at his Provo home on February...

Send flowers to the Smith family.