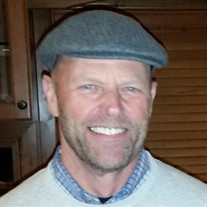 Bernard (Bern) John Bennett Wilson, 61, passed away on September 2nd, 2019 in Heber City, Utah. Bern is survived by his two daughters, Gabrielle and Brianna Wilson, and his wife, Lana Wilson. Bern was born in Wellington, New Zealand on the 4th of December 1957. He was the oldest of his three siblings, Jane Brown, Sue Riley and Tim Wilson. Bern graduated from the University of Otago in New Zealand. Following that, he had many wonderful adventures, one of which brought him to the USA where he met Kelly Johnson. They were married and had two beautiful daughters, Gabrielle and Brianna Wilson. Bern worked at Fieldstone Homes for many years and was Division President. Bern held other roles in the Salt Lake City housing industry following that, and returned to Fieldstone Homes in 2019. Bern married Lana Wilson in 2013 and cared for her two daughters, Elizabeth and Katie. As a child, Bern was always curious, and through all his years he was known for his intense passion and tenacity in all that he did. His family paid this tribute to him, “Bern was one of the kindest and most patient people you could ever meet. He opened his heart and home to many people over the years and will be missed intensely.” Bern had immense love for his family, fishing, hiking, mountain biking, he was proud of his record collection, his Porsches, and of course his home-brew beer. In true kiwi spirit, he passed away with his boots on while doing what he loved, mountain biking in the Heber trails. Bern would have wanted us all to support our local record store and enjoy a cold beer. Bern is preceded in death by his parents, John and Kerry Wilson, from Christchurch, New Zealand. A memorial service to celebrate the life of Bern will be held at Saint Mary’s White Pine Catholic Church, Park City, Utah at 11:00 am on Thursday, 12 September. In lieu of flowers, donations to the Alzheimer's Association or the American Heart Association would be appreciated by the family. Friends and family may visit the online guestbook and share a memory of Bern at www.hebervalleyfuneral.com.

The family of Bernard J Wilson created this Life Tributes page to make it easy to share your memories.

Send flowers to the Wilson family.