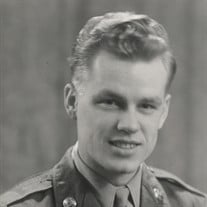 Benjamin Turner passed away peacefully on April 28, 2022 in St. George, Utah at the age of 100. He was born May 30, 1921 in Heber City, Utah. He was one of five children born to Anna M. Willmore and John M. Turner. He attended Wasatch High School in Heber City. He was a member of The Church of Jesus Christ of Latter-day Saints. As a young man he learned the value of hard work and he and his twin brother Bob built their first home at age 16. He and his brothers owned Turner Building Supply, employing many people in Heber City and constructing some of the churches, stake centers and the Heber City Post Office. Ben proudly served in the U.S. army as a company clerk during World War II from 1942-1946. While serving in Liverpool, England he met Ethel Alice (Happy) Mannouch and after two dates he knew she was the girl for him. Ben returned to the states, but they corresponded by mail for nearly two years until Happy came to the U.S. and they were married on June 19, 1948. They were sealed for time and eternity in the Salt Lake Temple on January 6, 1950. They were blessed with three children, seven grandchildren and ten great grandchildren. Ben was an active member of his community in Roosevelt and Heber City. He was a kind neighbor and business owner always being willing to lend a hand to a neighbor or a customer. After retiring, he and Happy settled in Salt Lake City and spent the last years of their lives in St. George. They served in the Arkansas Mission. Ben held many callings in his church and he and Happy enjoyed working in the Provo and West Jordan Temples. Ben and Happy were best friends throughout their 72 years of marriage. They shared a love of travel, the gospel, movies, music, singing and dancing. Ben was a true patriot and loved his country. He was privileged to be part of the 2015 Honor Flight to Washington D.C. in April 2016. Ben is survived by his children, JoAnn Summers (Dave), John Michael Turner (Kathleen), Wayne B. Turner (Leigh Ann), his grandchildren/spouses, and great grandchildren. He was preceded in death by his parents, his siblings, his beloved wife and a grandson, Benjamin W. Turner. Our family will deeply miss our patriarch. He taught us to forgive, to work hard, to see the good in every adventure and in every person. His grandchildren and great grandchildren loved to hear “gramps” stories and Ben was proud that they were good citizens. We were blessed to be his family and be recipients of his love and wisdom. Special thanks to Encompass Home Health and Hospice and Spring Gardens Assisted Living (St. George) facility for their tender care. Services will be held Saturday, May 14th at 1:00 p.m. at the Heber City West Stake Center. A viewing will be held at 12:30 p.m. prior to the funeral service. Interment will be at the Heber City cemetery. In lieu of flowers we request donations to the Humanitarian Fund with The Church of Jesus Christ of Latter Day Saints for the benefit of the Ukranian people

Benjamin Turner passed away peacefully on April 28, 2022 in St. George, Utah at the age of 100. He was born May 30, 1921 in Heber City, Utah. He was one of five children born to Anna M. Willmore and John M. Turner. He attended Wasatch High School... View Obituary & Service Information

The family of Benjamin Turner created this Life Tributes page to make it easy to share your memories.

Send flowers to the Turner family.