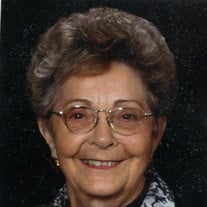 Barbara June Stevens, 88, mother, grandmother, great grandmother and friend, passed away May 7, 2018 at the The Abbington at Heber City, after a long battle with Dementia. Barbara was born Oct. 10, 1929 in Park City, Utah, the youngest of 3 daughters to Milton (Mick) P Stevens and Marvel Jane Woolstenhulme. She attended school in Kamas and graduated from South Summit High School and Stevens-Henager College. She married Keith L. Prescott, Jan. 3, 1952. She and Keith co-owned the “Stevens Motel” in Kamas. They were married for 45 years before he died on Jan. 16, 1997. She was sealed to him on Jan. 3, 1998 in the Salt Lake Temple. She is survived by their children: Mickie (Dino) Carusos of Boynton Beach, FL, Karen (Jerry) Pace of Hoytsville, UT, Steven L. Prescott of Taylorsville, UT, and John W. Prescott of Draper, UT, as well as, 14 grandchildren and 24 great-grandchildren. Barbara found a dear companion in Ira William (Bill) Thomas. They were married July 6, 2002 for 12 years. He passed away on Oct. 14, 2014. She was preceded in death by her parents, her husbands Bill and Keith, her two sisters Wanda Chamberlain and Bonnie Matlock, and her grandson Robert Keith Siddoway. The family would like to thank the staff at The Abbington for their loving kindness to mom and especially to all those that work in the Memory Care Unit. Thanks to Encompass and the Hospice team for all your support. We love you mother and will never forget you. We are sure she had an escort of Angels taking her to paradise. Viewing hours are Thurs May 10th from 6-8pm and Fri 10:45-11:45 am. Funeral is Fri 12:00 pm at the Francis Ward Chapel. In lieu of flowers, please donate to fund research for the cure of Alzheimers.

Barbara June Stevens, 88, mother, grandmother, great grandmother and friend, passed away May 7, 2018 at the The Abbington at Heber City, after a long battle with Dementia. Barbara was born Oct. 10, 1929 in Park City, Utah, the youngest of 3... View Obituary & Service Information

The family of Barbara June Prescott Thomas created this Life Tributes page to make it easy to share your memories.