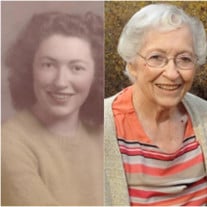 Barbara Bryner McDonald, beloved mother, grandmother, great-grandmother, and sister, passed away on March 11, 2016, surrounded by her loving family in Heber City, Utah, at 91 years old. Barbara was born of rich pioneer heritage on October 14, 1924, to Irvin and Lola Bell Bryner, in St. George, Utah. She was the second of five children. While growing up, Barbara learned to play the piano and became an accomplished pianist. She also did well in school, and dreamed of becoming a nurse. After graduating from high school in St. George in 1942, Barbara attended her first year of college at The Branch Agricultural College in Cedar City. While attending college, she was asked to be the accompanist for the men’s choir where she learned to love classical music. In 1943, Barbara attended the College of Saint Mary of the Wasatch, in Salt Lake City. While attending there, she received an official pin of the Kappa Beta Sigma, honorary scholastic society. Barbara graduated from Holy Cross Hospital School of Nursing in 1946, and went on to receive her Bachelor of Science in Nursing at St. Mary’s where she had been awarded a scholarship. During that time, she also worked part-time at Holy Cross Hospital. She graduated with her Bachelor of Science Degree in Nursing on June 6, 1947. In December of 1946, Barbara met the love of her life, Guy McDonald, from Heber City, on a blind date. They were married in Overton, Nevada, on April 2, 1947, and later their marriage was solemnized in the Salt Lake LDS Temple. Barbara and Guy lived in Heber City and raised seven children. Barbara was a housewife until 1966 when she decided to pursue her nursing career. Barbara was hired at The University of Utah Medical Center in Salt Lake City, where she held several positions. Her last position, from which she retired, was as Head Nurse of the Rehabilitation Unit where patients with spinal cord injuries were cared for. While in that position, not only was she in charge of managing the unit, but she also taught paralyzed patients how to care for themselves and function in the real world. As part of that job she gave seminars and authored books on the subject. She retired from nursing on September 16, 1987. Barbara had a passion for preserving history, and she became very involved in the local Save the Tabernacle Committee who worked relentlessly to save the Heber Tabernacle from being demolished. The Tabernacle stands today as a symbol of her and the committee’s valiant efforts. As one of the most well-known pianists in Heber Valley, Barbara was often called upon to accompany local singers, and she served as accompanist to the Heber Valley Choralettes for several years. Additionally, she served as her LDS Ward organist for most of her life, playing both the piano and pipe organ. Barbara regretfully had to give up playing the piano a few years ago due to arthritis in her fingers. Being a loving mother, wife, and an educated career woman was not all Barbara did; she also was very active in her church, and she enjoyed pursuing many personal interests as well. She was known for her sewing and gardening skills. As a skilled seamstress, she sewed clothing for her children, and she planted and tended a large family garden, bottling fruit and vegetables and making jam every year. She also loved flowers so she often could be found planting flowers and weeding flowerbeds in her yard. Barbara enjoyed cooking for her family too; she baked a fresh batch of homemade bread every week for years. At Christmas time Barbara enjoyed making candy to give as gifts. She made dipped chocolates, caramels, and her famous English toffee. In addition, Barbara was an avid reader, and she loved to write. She kept a diary/journal for the past 40 years, and helped her husband write his history. Working on writing her own family history was one of her greatest pleasures the past few years. Barbara was preceded in death by her loving and devoted husband of 65 years, Guy S. McDonald, on January 8, 2013; her daughter, Elizabeth McDonald Palmier, on February 28, 2016; and her grandson, Preston Parcell, on October 25, 2012; and her siblings: Dwane Bryner, Elaine Hale, and Boyd Bryner. She is survived by her children: Michael (Jan) McDonald, Clovis, CA; Kathleen (Jim) Davis, West Valley City, UT; Robert (Debbie) McDonald, Heber City, UT; Richard (Jill) McDonald, Vernal, UT; Caroline (Michael) Kelley, Clovis, CA; and John (Gina) McDonald, Heber City, UT; her brother Clair Bryner, Las Vegas, NV; and twenty-seven grandchildren and forty-two great-grandchildren. All who knew and loved Barbara will miss her tremendously. The family would like to offer their appreciation to all those who cared for their mother in the past few months, especially the staff at The Abbington and the doctors and staff at Heber Valley Medical Center who treated her with kindness and respect. A viewing will be held at the LDS Heber 6th/9th Ward building at 325 E. 500 N., Heber City, on Thursday, March 17, 6:00-8:00 P.M. The funeral service will be held at 11:00 A.M. Friday, March 18, at the LDS Heber 6th/9th Ward, with a viewing beforehand from 9:30-10:30 A.M. Burial service will take place at Heber City Cemetery, 700 N. 550 E., immediately after the funeral service. In lieu of flowers, Barbara would be honored if you made a donation to your favorite charity in her name. Condolences maybe shared online at www.probstfamilyfunerals.com

The family of Barbara Bryner McDonald created this Life Tributes page to make it easy to share your memories.