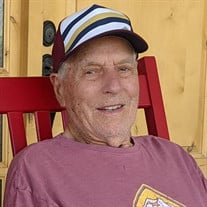 Anthony Michael Aloysius Yacek, 90, passed away December 16, 2021 fulfilling a long, healthy life. Born in Elizabeth, New Jersey on December 31, 1930, Baby Tony Mike was the youngest of three children. Growing up during the Great Depression, Tony acknowledged that his childhood was difficult but his parents always kept them fed and clothed. Tony remembered his childhood with fondness and often talked of playing softball with all the local boys. Tony was a veteran of the US Navy assigned to the Seabees, the Navy’s construction force. On February 16, 1969 Tony married his sweetheart and love, Marlene Giles. He was a successful plumber and also found success in metals recycling. Tony’s hobbies included antiquing and the occasional game of golf. He and Marlene enjoyed traveling, eating out, and going to see movies. Tony played senior softball well into his seventies and is named in the Union County, NJ Softball Hall of Fame. He also participated in the annual San Francisco Bank of America Building Stair Climb into his eighties. He eventually retired in Heber City, Utah. Tony is survived by his loving wife of 52 years, Marlene Yacek; nieces Jo Ann Farawell and Florence Gilson; nephews John Yacek, Raymond, Joseph and Walter Skarzenski; and a slew of grand and great grand nieces and nephews. Tony was preceded in death by his parents, Charles and Julia Yacek and his older siblings John Yacek and Florence Skarzenski. Funeral Services will be held at the Heber Valley Funeral Home on December 27, 2021. A Viewing will begin at 12:00pm followed by the Funeral Services at 1:00pm. Internment will be at the Heber Cemetery. Please join us in honoring Tony, a simple man who pretended to be very tough, but really was kind-hearted and compassionate. A loving husband, an adoring son, a respected uncle and a loyal friend. Tony will be deeply missed by all who had the pleasure of knowing him. May his memory be eternal. Anyone wishing to view the service via livestream can do so at this link https://my.gather.app/remember/anthony-michael-yacek

The family of Anthony Michael Yacek created this Life Tributes page to make it easy to share your memories.

Send flowers to the Yacek family.