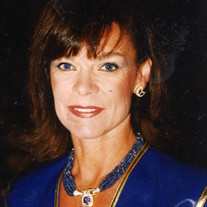 Anna Marie Magdalena McMillian, née Repping, was a woman full of flair and heart in equal measure. She was born​ an identical twin to Peter Antoon Repping and Anna Maria Barbara Wewer on September 9th, 1942 in Zeist, the Netherlands during the 2nd Great World War. Her mother fought to keep three baby girls alive through the time that their father - a mechanical engineer - escaped from a Nazi labor camp. The family moved from their home in Hengelo, the Netherlands to Vereeniging, South Africa in 1952, where a fourth daughter was born, and finally to Sydney, Australia in 1961. Anna Marie met the love of her life John Guy McMillian while employed as a business secretary in Australia, and they married five years later, on December 15, 1973. After moving to Salt Lake City, Utah from Houston, Texas, their daughter Laura Anne McMillian was born on February 12, 1980. Three years later, they moved to Miami, Florida and stayed there for 14 years before turning their once vacation home in Deer Valley, Utah into their permanent home. They also enjoyed summers in Nantucket, Massachusetts for many years. Anna Marie worked with multiple non-profit organizations in the areas of music and disabilities. She was a loving and devoted wife. A caring, and empathic mother. A social butterfly and "hostess with the mostess." An accomplished and beautiful skier and tap dancer. An excellent home, family, and travel organizer. A certified SCUBA diver. A talented improvisational cook. A polyglot of 8 languages from around the​ world. A connoisseur of sophisticated art, music, and fashion. A poodle-wrangler.​ A woman of wry humor and strong views on numerous issues. A humble person who treated everyone equally regardless of their station. She died on December 7, 2019, approximately ten years after being diagnosed with Alzheimer's Disease. She is survived by her daughter Laura, mother Annie, older sister Wilma,​ identical twin sister Barbara, younger sister Margaret, stepsons Johnny, Hayden, Michael, and Todd McMillian, and numerous nieces, nephews, and stepgrandchildren. She is pre-deceased by her husband John, father Peter, and stepgrandson Mikey. A private service was held on December 11, 2019 at Heber Valley Funeral Home in Heber City, Utah for family and close friends. A later Celebration of Life event will be open to anyone who knew and loved her. For details, please contact Laura McMillian at 818-613-2645.

Anna Marie Magdalena McMillian, née Repping, was a woman full of flair and heart in equal measure. She was born&#8203; an identical twin to Peter Antoon Repping and Anna Maria Barbara Wewer on September 9th, 1942 in Zeist, the Netherlands during... View Obituary & Service Information

The family of Anna Marie Magdalena McMillian created this Life Tributes page to make it easy to share your memories.

Send flowers to the McMillian family.